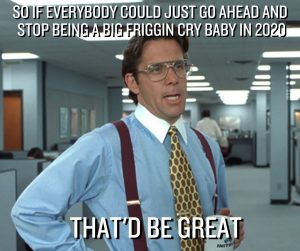 In the current climate of taking offense at every little word or perception or belief, I think it’s time for us to stop worrying about what others may or may not think of us, and get on with life.  Yes, there is such a thing as courtesy and manners, but when it really comes down to it, if you are so insecure to think that what I may say (or seem to say) about you, or appear to think about you, makes a hill of beans of difference, then you need to rethink it.

There are a number of things to remember, in all this:

What has happened, gradually, over the last few decades, is that our moral compass has gradually gone away from the Judeo-Christian ethic on which our country was founded, to an increasingly amoral culture that seeks to make everything legal and nothing sacred.  Every obscure and twisted “lifestyle” or “orientation” is being pushed as normal, and the traditional family is being attacked as “hateful”.  Our education system has gone from teaching reading, writing, and arithmetic, to indoctrination toward aberrant lifestyles and political systems, and teach WHAT to “learn” rather than HOW to learn.  Universities are turning out leftist talking point spewing ideologues who have no ability to think critically.

The election of President Trump was a reaction to this decay in our culture… and this must continue.  If the current crop of ideological far left morons gets into power, our country and culture of individual freedom will be gone in a very short time.  President Trump has presided over some great positive steps in reclaiming some of what has been gradually taken from us, including rolling back regulations that crippled small businesses, lowering taxes on all of us, and reclaiming our respect around the world that was lost during President Obama’s “apology tour” and irresponsible foreign policy.  It is absolutely critical that we reelect Donald Trump to finish what he has started, and that we on the conservative side of politics take back control of Congress, by increasing our majority in the Senate, and taking back the majority in the House.